If you’ve had the experimental jab, please stay away from me and my kids.

Warning to those who have received the jab: Until more information comes to light about these abnormal bleeding events, the risk of sterilising children and young adults has potential. Not to mention adversely affecting normal menstral cycles, blood clotting, abnormal bleeding and more. So until this experiment is concluded, if you get the experimental pandemic jab, please stay away from me and my kids! 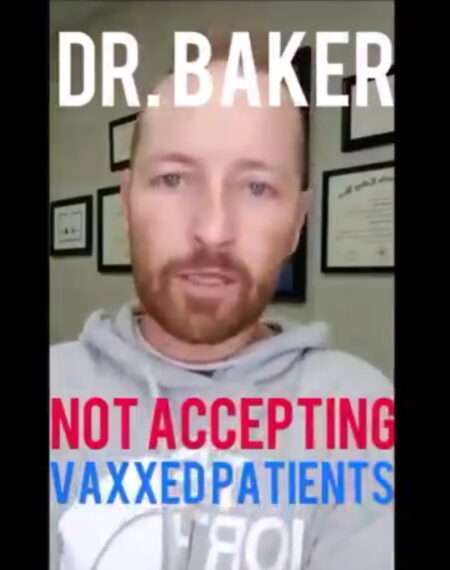 A Doctor takes a stand – If you’ve had the jab, stay out!

Watch the video below as a doctor refuses to let into his office patients who have recently received the experimental COVID jab, because they could be transmitting or shedding something that we don’t know about yet.  Its a precautionary measure to protect his staff.

Stay away from my practice to protect my people the doctor communicates.
80% of the women in his office have been experiencing weird female cycles and he’s not taking any chances while this jab is under experimentation.

Did the manufactures observe the un-jabbed population in their trials?

In April 2021 more and more reports started emerging in social media that woman and young girls, and even a baby, who had NOT received the jab, but were in close proximity to those who had received a COVID jab, they reported strange bleeding events. Suggesting that maybe there is some kind of transmission or “shedding” behaviour happening as a result of these new technology, experimental jabs, for a disease that 99.9% survive without the jab.

So the message is, if you choose to get the experimental pandemic jab,
please stay away from me and my kids!

Until more information comes to light, the risk of sterilising children and young adults is possible.  Also there is a chance of affecting normal menstrual cycles, causing blood clotting, abnormal bleeding and more.

So until this experiment is concluded, please, if you get the experimental pandemic jab, please stay away from me and my kids!

Jabs are not Registered!

The Jab is experimental, not “Registered”.  They are being tested on the population of the world, including here in Australia.  It is all as a response to the WHO declaring a pandemic in March 2020 and the cascade of events there following.  They can sugar coat the registration status as much as they want but the truth is the AstraZeneca and Pfizer jabs for this disease labelled COVID-19 are still under post-marketing experimental investigation – they are not fully registered.

The TGA has granted Provisional Registration, as a followup response to the Australian government declaring a Biosecurity emergency and each state has declared a state of emergency.

It is important to understand that ALL study information provided to the TGA for each “vaccine” is done solely by the manufacturers, who happen to be liability exempt!

It would seem the vast majority of Australians simply trust the authorities?  Why?  Who’s duty is it to keep them honest?   Is it the doctors?

What are our Doctors told to tell you?

A must read is what Australian health professionals are being taught about these new vaccines, on this new virus.  When you have an understanding of the science of previous coronavirus vaccines, and the fact that the mRNA technology is brand new for a “vaccine”, and has never before been used on humans as a vaccine, these statements for the “authorities” that advise our doctors is alarming.  It would appear doctors are meant to simply trust their “executive-level” advisors:  A statement from the International Coalition of Medicines Regulatory Authorities

The authorities have been open that the jabs will likely cause some “mild” side effects.  But now that the wider population is receiving the jab more and more adverse events are being reported. Some within minutes, some within hours, some 1, 2, 3 or more weeks after the jab – including many deaths following receipt of the jab. All this information is meant to be collected and if patterns occur this needs to be looked into.

So as the jab is rolling out, the population is sharing their experience post-jab on social media and passively on official adverse events websites such as CDC’s VAERS.  Active surveillance would mean every one is followed up, and everything is reported, but the truth is surveillance is passive, it is not mandatory, and it is being discovered that doctors and nurses didn’t even know the reporting system existed!

All post marketing information needs to be reported then collated to build a picture of potential adverse event, so a true risk to benefit analysis can be done.  During the 2 month trials that were conducted by the manufactures, were the surrounding individuals assessed for any potential side effects?  Not that we are aware.

So in this post marketing phase of the experiment, surveillance and data reporting is critical.  Nothing should be discounted, everything should be added to the surveillance databases to see what patterns emerge.  Observation is a key part of science!

But something strange is happening to the un-jabbed population

In the month of April 2021, there has been an alarming number of reports from women who have received the jab, but also from those who are un-jabbed but are in close contact with those who have received the experimental jab.  This latter group have commented on social media about abnormal bleeding and messed up menstrual cycles, including very young girls and even a baby!

As the manufactures of the jabs have not looked at this, and they have no liability, who is responsible?

Surveillance is our only chance of safety assessment

The phase three trials conducted for the COVID-jabs were limited in their scope, the main focus being to see if the jab would help reduce symptoms from the disease known as COVID-19.  The trials only lasted for 2 months before the control group was offered the experimental jab. So two months is the limit of the safety assessment, which means post marketing surveillance is our only chance of long term safety assessment, but the population is that guinea pig.

So there will never be now long-term safety trials – only surveillance – post jab observation and data collection.   But what about the un-jabbed, are they at risk too?  Remember these mRNA jabs are completely new technology.

At this point in time, it is not known if the jabs will stop viral transmission, or prevent viral infection of the SARS-CoV-2 virus. They have only been “shown” to reduce disease symptoms. So the only way to learn about safety is to collect as much data as possible as the jabs are being rolled out!

Following are a series of videos we are collecting that are helping to make sense of this observed adverse event reported by some un-jabbed individuals.

“…so the spike protein is not unique to SARS-CoV-2” as a BLAST genetic database search returns “at least 90 sequences in the human genome…which have this same sequence.”

Molecular Therapy – paper showing evidence of nano-particles found in fluids of rats after intravenous injection, as referenced by Dr Cowan (@21min), demonstrates a potential mechanism for transference from a jabbed individual to a non-jabbed.

Precautionary Principle suggests we should “halt the vaccines until we’ve figured out what is going on and proven they are safe”.

Luigi Warren is the current President and CEO of Cellular Reprogramming, Inc, and is renowned for his work with Derrick Rossi, the co-founder of Moderna.  He is one of the “pioneers of the prevalent applications of mRNA technology, possibly including the Covid-19 vaccine.
Luigi Warren tweeted (account now suspended) that people vaccinated with mRNA-based vaccine can shed spike proteins.  He added that this shedding is in minuscule amounts and hence cannot harm anyone.

From injection site to spreading – is it possible?

Trying to present all sides of the story.  After all this is an experimental vaccine, and the populations is the experiment.